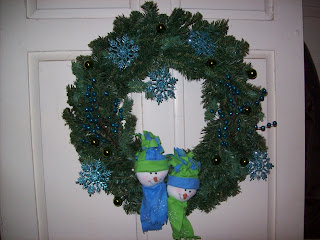 ...... and here I am back at the lovely Crafty Christmas Club blog.  As we in the US balance precariously on the edge of the "fiscal cliff"  I see it will be another year of very sparse gift-giving.  I've made my usual socks and also this cute little wreath.  The snow men are from a kit from the Herrschner's Craft Catalog. 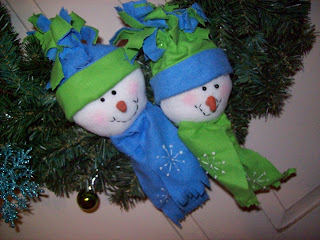 Then I just went crazy at Hobby Lobby to find little bits and pieces to make up the wreath. 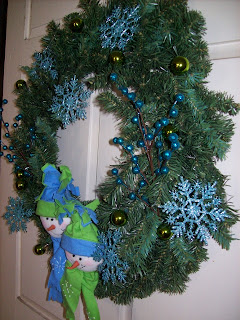 I am usually quite traditional in my color schemes for Christmas, but I really like all the aqua blue and lime green I see out there in the "modern world"!

So many more ideas dancing through my head, but I'm running out of time.  Oh well, there's always next year!
Posted by Jennifer at 09:09 31 comments:

I know its super early... 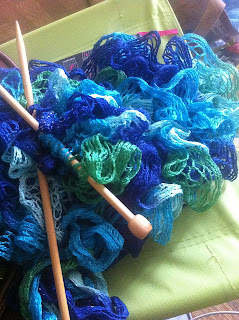 But i've already been hard at work with Christmas gifts owing to a nearly zero budget this year, and i've been desperate to post!
(for those who read my blog you know we bought a rundown house leaving us with practically zilch)
I've added knitting to my repertoire this year so heres my list so far of people and presents i'd like to get done.

This may increase depending on my productivity.
The frilly scarf above is the first of many. This is for my Mama to compliment her favorite emerald green coat.
I've nearly completed a plain green one for M.I.L

As always this is hush hush as my family read my blog, But please feel free to mosey on over there!
I'm at beebeesvintagedress.blogspot.com
Posted by Stevie at 02:49 9 comments:

Crafty Christmas Club crafters - good work! Thank you for sharing all your lovely makes and being inspirational. Let's give ourselves a break now until next year - the blog will be open again from Autumn 2012. If new members would like to join, please get in touch then.

Email ThisBlogThis!Share to TwitterShare to FacebookShare to Pinterest
Labels: admin

Well, I think my big list of potential makes was a tad optimistic! An awful lot of my time (far more than I had originally anticipated) was spent knitting the rudolph jumper.

I'm not going to lie. It was a hard make. Perhaps not the best pattern to knit my first jumper from. That may be a little harsh though - the plain red bits were fairly straightforward, it was just knitting the reindeer that slowed me down. It wasn't until half way through I finally figured out how to strand properly, so inside the top half looks all neat and tidy, like this.... 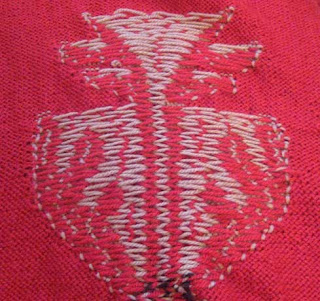 Whilst the bottom half looks a fine mess... 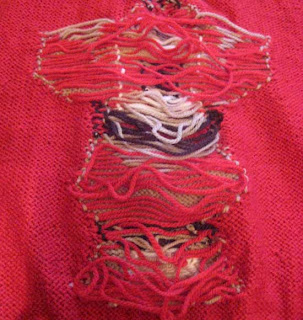 I had a few heart stopping moments though. When I reached the top of the antlers, I realised I'd forgotten to shape the armholes. The thought of having to frog 20 rows made me feel more than a little sick, and I didn't touch it for a week - I didn't want to make yet more mistakes by rushing into correcting it. And then when I knitted the neckband to join the front and back together the night before I was due to go back to my mum's, I realised that I couldn't fit it over my head, so there was no way it would fit over my brother in law's head. Rather than have to frog and reknit the neckband, mum had the genius idea of using buttons on the shoulder. This led to a last minute dash to a local knitting store with my mum (about 30 mins before it was due to close on Chistmas eve) to find some suitable buttons...

Still, it was suitably appreciated by the new owner, who modelled it with great aplomb. He even wore it down the pub on Christmas day (although, sadly no photos of that!). 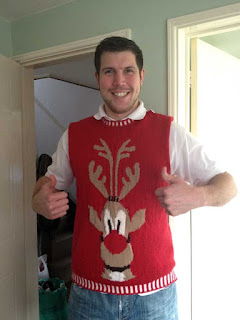 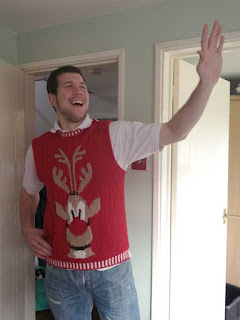 OK, so there's no sleeves, but I think he carries it off! Plus, what else could his present be next year? I still seem to have quite a lot of red yarn left, so I put some of it to good use when wrapping. 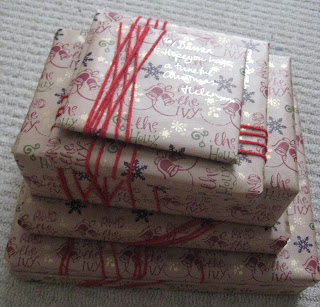 I'm still loving the Christmas bunting though, and I might make some more bunting next year in the smaller size for the other shelves. Sadly the ribbon wreath didn't work out. I'm not sure if it was the type of ribbon I bought, or using a wire form rather than foam, but after adding about 20 bows, I realised it looked more like something to be used when dancing round the maypole, rather than a classy Christmas wreath. Next year, I'll attempt the felt flower wreath now that Adele has pointed me in the right direction of foam wreaths!

And while I keep thinking that's all I've made this Christmas, I also made a fair few make up bags and tote bags. 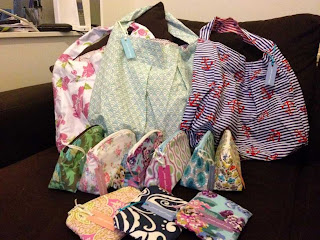 Round up of Christmas presents

Here is a little look at some homemade Christmas presents. Both the ones I made and gave away and the ones I got. For more inspiration check out my Pinterest board "Making Christmas Gifts 2011" and my blog Eddie's room.

A tray my husband and I decoupaged with maps for my little brother who is studying geography.

I made these Christmas stockings for my husband and myself using this free tutorial.

My sister made this vinyl record bowl for my husband. There is a free tutorial for this here.

She also made him this fab pencil case for his art pencils.

For me she made this pretty shawl which I can't wait to use.
Posted by Unknown at 10:04 1 comment:

Greetings, Crafty Christmas-ers!  I hope you all were able to finish up your projects before Christmas.  I completed my last Christmas gift on Christmas Eve morning thanks to a cold that decided to show up last week and knock me on my ass for a few days.

I made the Explorer Vest from Oliver + S' Little Things to Sew for my nephew.

I'm happy to report that he loves it!  He promptly shoved all of his spy gear into all of the pockets!
The pattern was really easy to follow.  I'm so excited to make more projects from the book.  More information can be found on my blog.
My last Christmas-y project was for my mom's birthday.  It is today and since she's getting back into knitting, I made her a roll to keep her knitting needles in.  I used the Tool Roll pattern from Lotta Jansdotter's Simple Sewing.  It was pretty easy to follow but I made a few modifications (more info on that can be found here).  Since I've been wanting one too, I made us matching needle rolls!

I don't know about you guys, but I am so happy that Christmas crafting is over!  I've had a great time reading about all of your crafting adventures.  Until next year!
Cheers,
Lindsay
Posted by Lindsay at 15:03 No comments:

I'm still technically not done, but...

If you can't tell by this post, I'm a procrastinator. Thought I'd recap what I was able to give out (and technically finish) these past couple days, though I'm still needing to finish a couple more gifts. I hope all of you had a wonderful holiday and that everyone enjoyed your amazing crafty gift goodness!

Making your own Christmas presents? Want to get inspiration and tips from other craftsters? You've come to the right place!
Crafty Christmas Club is now finished, but our projects will stay here for future inspiration.

Add this button to your blog

Who's running the show?

Hi, I'm Tilly. I blog about sewing over at www.tillyandthebuttons.com.

What are you looking for?

Who's in the Crafty Christmas Club?